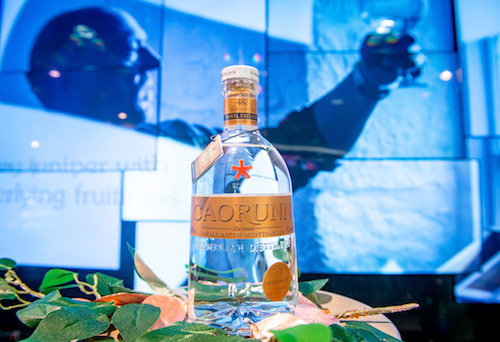 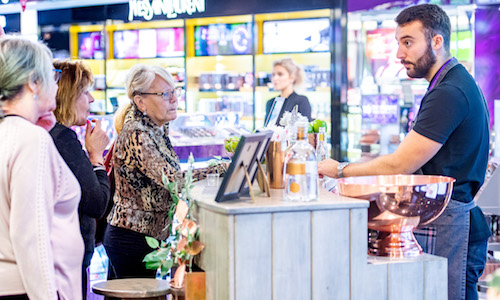 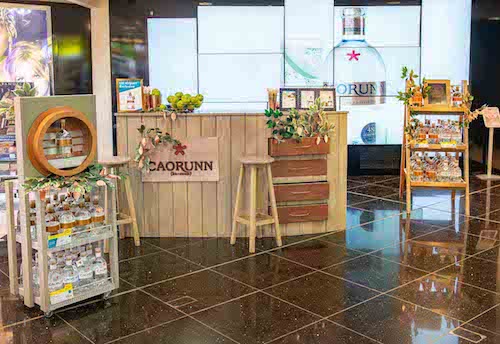 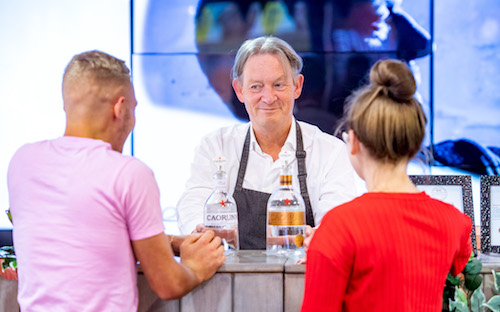 As a testament to the brand’s commitment to the Global Travel Retail channel, newly releasedGlobal Travel Retail exclusive GinMaster’s Cut is being featured in the company’s largest and most aggressive UK airport initiative to date. Caorunn’s immersive activation began at Glasgow Airport on August 29th, and will continue until September 25th.

In the engaging experience offered in the World Duty Free store – which is operated by global travel retailer Dufry – at Glasgow Airport, travellers are invited into a Caorunn “Bothy bar,” bringing the feel of traditional Scotland to their travels.

The promotional space is dressed in copper elements, highlighting the fact that Caorunn gin is made using the only working Copper Berry Chamber in the world. Display units showcase the newly released GinMaster’s Cut bottle, the same distinctive five-sided bottle as classic Caorunn gin, but with striking copper flourishes and an embossed copper foil seal.

An exclusive video animation plays on a feature screen located behind the bar, and a sampling experience hosted by Caorunn’s Travel Retail Brand Ambassador highlights theScottish heritage and craftsmanship championed by this multi award-winningScottish gin. Further calling out Caorunn’s copper heritage, passengers are offered a complimentary copper jigger when they purchase a bottle of Caorunn Gin Master’s Cut.

As the home market leader and the top-selling gin in Scottish airports in 2016-2017,Scotland’s Caorunn Gin is a natural for the global travel retail market. Caorunn Gin Master’s Cut was crafted exclusively for the travel retail channel by Caorunn’s longstanding Gin Master Simon Buley at Balmenach Distillery in the Scottish Highlands.

Simon Buley has chosen to offer this special exclusive at 48% ABV, a strength selected to bring Caorunn’s distinctive flavours and aromas to the fore.

Caorunn Gin Master’s Cut has been available since July exclusively in select World Duty Free tax and duty free stores in the UK for a three-month period as a key brand in the travel retailer’s summer liquor promotions. It will be available throughout the global travel retail & duty free channel from October 3rd. Retailers will be able to sample Caorunn Gin Master’s Cut at the International Beverage stand, Marine Village S2/S3, atTFWA World Exhibition in Cannes.

Caorunn and Dufry together offered a calendar of marketing events at locations across the UK over the launch period including airport tastings, an exclusive gift with purchase linked to the travel retailer’s  “Reserve and Collect” service, an appearance at Heathrow’s Summer Gin Festival and a competition on Dufry’s RED loyalty programme app.

Edinburgh Airport featured a Gin Master’s Cut sampling activity to coincide with the Edinburgh International and Fringe Festival, an event that brings hundreds of thousands of visitors to the city each August. To coincide with the activation in Glasgow at this UK-wide campaign, branded activities featuring Caorunn Gin Master’s Cut will also be taking place in Dufry’sWorld Duty Free stores at Heathrow Terminal 2, London Gatwick North and itsBiza Tax & Duty Free stores at Manchester until October 3, 2018.

Caorunn Gin Master’s Cut 1L, which is the first-ever line extension since the brand was first distilled in 2009, is offered in 35 UK stores in partnership withDufry’s World Duty Free UK airport shops. Caorunn Gin 41.8% is offered in 55 airport stores in the region.

Commenting on theGlasgow Airport activation, International Beverage Sales Director for GlobalTravel Retail James Bateman said: “InternationalBeverage is committed to building its brands in Travel Retail and the new Caorunn Gin Master’s Cut is the latest outstanding and exclusive product. We enjoy sharing the Scottish small batch gin experience with passengers at Glasgow and throughout other British airports as they sample and learn about our heritage and craftsmanship.”

Matthew Scott-Fairweather, Liquor Product and Promotions Manager UK, Finland, Sweden and Germany for Dufry added: “Caorunn Gin has proven a great success in World Duty Free stores across the UK; we are pleased to partner with International Beverage to offer this singular tasting experience in Glasgow and other airports across the UK. The ‘bothy bar’ activation is a fun way to engage passengers and allow them to taste a special gin unavailable anywhere else, one which they can take home for themselves or as a unique gift.”

Caorunn has been nominated for “Marketing Campaign of the Year” at the forthcoming Scottish Gin Awards for 2017’s achievements in the same space.

Scotland is home to 70% of the world’s gin distillers, and Caorunn is the home market leader.

Multi award-winning Caorunn is among the top-5super premium gins in the UK.

Caorunn Gin is the number three best-selling super premium gin brand in UK Duty Free and is a top ten brand in Global Travel Retail and Duty Free (IWSR 2018). It is available in more than 150 travel retail outlets across more than 50 countries.

The name Caorunn is Gaelic for “rowan berry,” the fruit of the rowan tree, also known as mountain ash, and one of the locally sourced botanicals featured.

Created in2009, Caorunn was among the first handcrafted small batch premium gins made in the UK, and the first to be made in a traditional malt whisky distillery inScotland.

Distilled using the world’s only Copper BerryChamber in 1000L batches at Balmenach Distillery (est. 1824), sited within theCairngorm National Park and close to the river Spey in the north of Scotland.