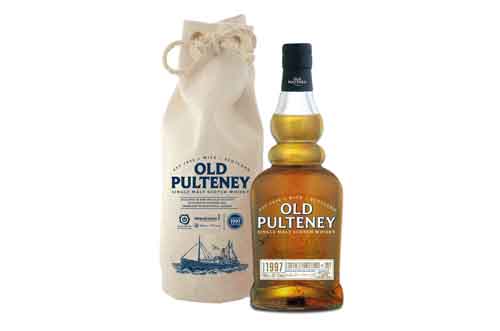 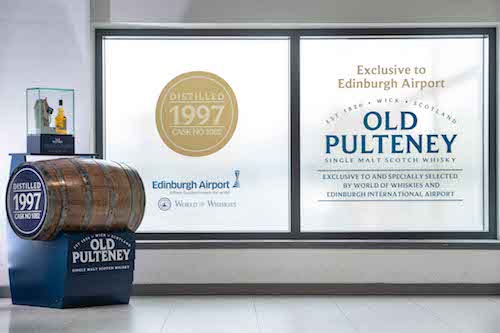 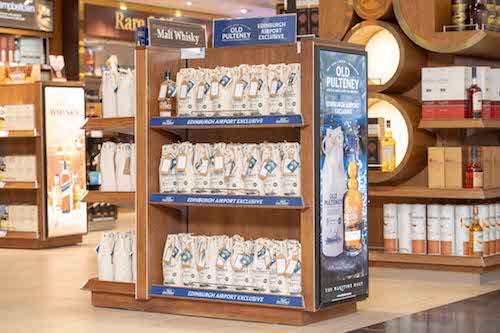 Old Pulteney, one of the world’s finest and most distinctive single malt whiskies, has just released Old Pulteney 1997single cask, a 20-Year-Old single malt Scotch whisky available as an airport exclusive in partnership with DufryGroup for their WDF-operated World of Whiskies shop at EdinburghInternational Airport.

The exceptional single malt launched exclusively at the airport’s World of Whiskies store on the 5th of September.

Just204 individually numbered bottles are available, presented in a traditional white canvas sailcloth gift bag printed with the cask number and details of the Edinburgh International partnership. This bespoke packaging for Old Pulteney,known as the “Maritime Malt,” was created in tribute to the rich seafaring heritage of Wick in Caithness, where Pulteney Distillery is located.

During the time of this exclusive offering, the actual American oak ex-Bourbon barrel in which the fine liquid matured will be visible in the pre-awareness area between airport security and the World Duty Free walkthrough area.

Every one of more than one million anticipated travelers must walk past the barrel display from September 5th through October 2nd or while supplies last. EdinburghInternational Airport enjoyed its busiest ever month in July 2018, with 1.6million passengers.

This rare, handpicked whisky is non-chill filtered, matured in the very American Oak ex-bourbon cask that will be on display, and is offered in 70cl bottles at a natural cask strength of 50.2% ABV. Retailing at £198.00, this expression is sure to catch the eye of any whisky aficionado traveling through Edinburgh.

As further evidence of its commitment to the global travel retail channel, International Beverage will announce an exciting new GTR-exclusive development in its Old Pulteney portfolio at a press conference on Monday October 1st atTFWA WE Marine Village S2/S3 at 2pm.

Be sure to drop by the booth to see and taste all of International Beverage’s new offerings in this channel.

Aroma: Rich and warming.  Fresh and fruity with notes of apples and pears yielding to generous vanilla sweetness.  Hints of spice, coconut and a hint of sea air add vigour.

Taste: Big and welcoming oaky notes opening with an agreeable nutty twist.  A great balance of sumptuous toffee, biscotti and dried fruits ushers in a long-lasting and comforting finish.

Shaped by its history, Wick was one of the world’s largest fishing ports with over 1000 boats bringing in trawls of herring, or silver darlings as they were fondly known. Since 1826 it has also been home to Old Pulteney single malt Scotch whisky, the Maritime Malt.

Defined by its stunning coastal location, Old Pulteney single malt Scotch whisky is a true and absolute reflection of the place in which it lies, the lively coastal Caithness town of Wick, situated onScotland’s north east coast.

With traditional warehouses exposed tothe invigorating sea air blowing in off the North Sea, Old Pulteney has a highly distinctive character. Infused by a unique combination of brisk sea air and meticulous cask selection, the whisky captures the taste of the sea in every drop. From subtle coastal chords to more defined salty notes, the flavour of our whiskies says much about the role and influence of its home.

Unusually shaped pot stills, with particularly large boiling balls, make for a more fragrant whisky character –and inspired the distinctive bottle shape – whilst our use of worm tub condensers, an increasingly rare practice, adds body and depth to the spirit.

No stranger to awards and accolades, Old Pulteney holds the coveted title of “World Whisky of the Year” for 2012 in JimMurray’s Whisky Bible – one of the industry’s highest accolades – and in 2016won the acclaimed “World’s Best Single Malt Whisky” at the prestigious WorldWhiskies Awards. Most recently, Old Pulteney 12 Year Old and 25 Year Old won gold at the San Francisco Spirits Awards 2018.