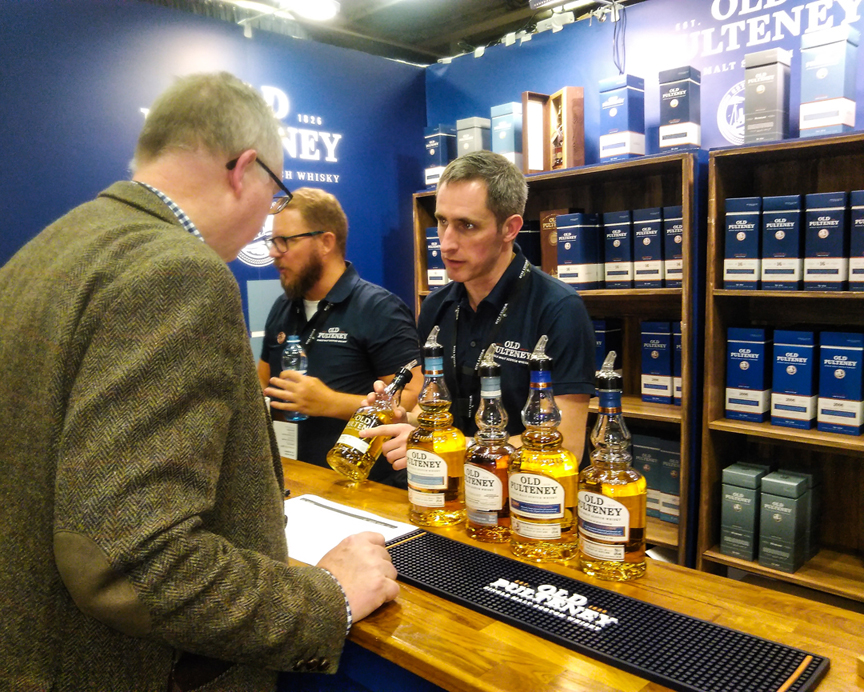 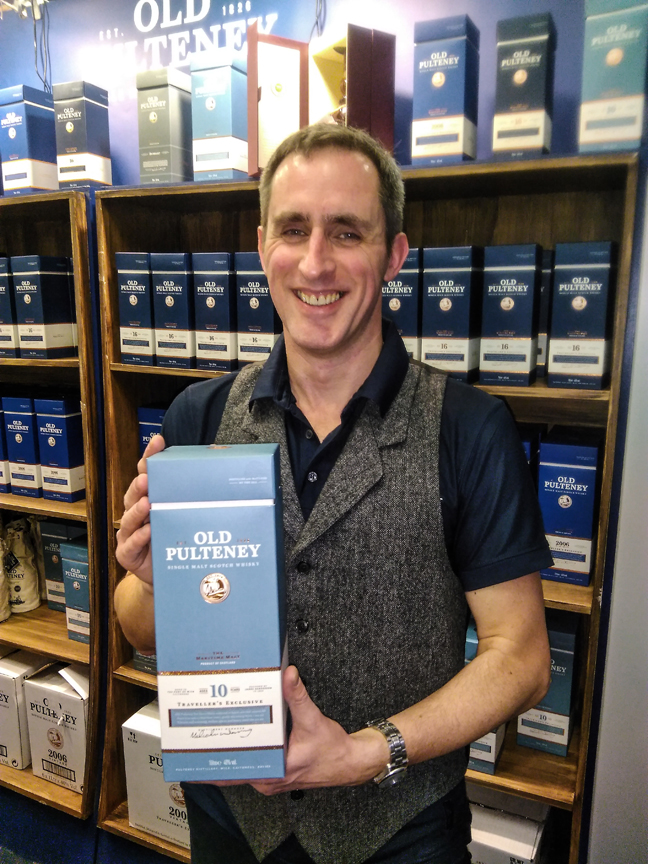 The global trade reveal of the new Old Pulteney Traveller’s Exclusive collection was staged at the number one event in the travel retail trade calendar last October, the TFWA World Exhibition & Conference in Cannes, France.

The single malt whisky collection, which comes in eye-catching contemporary packaging, consists of three new Old Pulteney expressions: a 10-year-old, a new 2006 Vintage, and a 16-year-old. InternationalBeverage’s spirits portfolio is represented in Nordic Travel Retail & DutyFree by Five Eyes Beverages, a subsidiary of Solera Beverage Group. They were also aboard the M/S Cinderella and presented a wide range from its Speyburn and anCnoc single malt Scotch whiskies at the Fair.

International Beverage’s Travel Retail Director James Bateman said: “The Cinderella Whisky Fair is one of the most important consumer events in our calendar; it’s a terrific bringing together of whisky fans from across the Nordic nations and ties in perfectly with the maritime themes of the Old Pulteney brand.

“Mark Williamson headed the presentation of these travel retail exclusive expressions and staged three outstanding master classes. It was great to share this collection with the whisky enthusiasts that make this truly unique event so special.”

10 YEARS OLD. The expression that offers an entry point into the collection, Old Pulteney 10 Years Old is a welcoming and warming whisky that clearly reflects the renowned character of the classic Maritime Malt.

Matured for 10 years in second-fill American oak, ex-bourbon barrels, this whisky is defined by a seamless union of rich sweetness and tangy citrus vibrancy, capturing the spirit of the sea through hints of salt.

This golden nectar embraces a subtle spectrum of flavours from creamy vanilla and toffee to fragrant floral notes and mellow spice. A touch of leather adds complexity to a lovely, lingering finish.

Offered in the one-litre bottle so popular in global travel retail, 10 Years Old has a very competitive RRP of £40 and an ABV of 40%.

2006 VINTAGE. The second expression in the collection, 2006 Vintage, is the only expression to be retained from Old Pulteney’s previous travel retail collection. Its packaging has evolved in line with the other two new expressions.

Polished copper in colour, this vintage single malt captures and celebrates a vibrant and rewarding moment in the history of Old Pulteney.

Elegant and energetic, this whisky offers a complex diversity of flavours: Intense melting-toffee sweetness and refreshing, spicy overtones join the classic salty sea note, contrasted with crisper, refreshing flavours of coconut, citrus and green apples. The complexity builds on the palate and culminates in a spicy, fizzing finish of caramel and freshly ground spices.

This is an energetic whisky with much to offer in terms of diversity.

Available in a one-litre bottle with an ABV of 46%, 2006 Vintage is non-chill filtered with natural colour, and offered at an RRP of £50.

16 YEARS OLD. Old Pulteney 16 Years Old is exclusive and exceptionally rare, first matured in American oak ex-bourbon barrels and then further matured in Spanish oak casks that have been seasoned with Oloroso sherry. The specific cask selection combined with a unique coastal influence creates an enriching whisky defined by spice and intensity.

Arguably one of the most comforting and fulfilling single malt experiences, Old Pulteney 16 Years Old is sweet, spicy and intense, sitting firmly in the seat of opulence.

Full-on spicy fruitiness is tempered by honeyed vanilla and a faint floral fragrance, while comforting chocolate notes hint at the indulgence to come. Each dram is packed full of juicy spices and mouth-coating richness, with hints of fresh green apples and seductive sweet toffee lending this whisky a long, delicious finish. From spicy fruitiness to the balance of honeyed vanilla, there is a rich sweet seam through every drop of this single malt.

Non-chill filtered and with natural amber colour, Old Pulteney 16 Years Old has an ABV of 46% and is offered at an RRP of £80 for a 70cl bottle. This exclusive selection is available only where additional two travel retail SKUs are stocked and allocated.

Shaped by its history, Wick was one of the world’s largest fishing ports with over 1000 boats bringing in trawls of herring, or silver darlings as they were fondly known. Since 1826 it has also been home to Old Pulteney single maltScotch whisky, the Maritime Malt.

Defined by its stunning coastal location, Old Pulteney single malt Scotch whisky is a true and absolute reflection of the place in which it lies, the lively coastal Caithness town of Wick, situated on Scotland’s north east coast.

With traditional warehouses exposed to the invigorating sea air blowing in off theNorth Sea, Old Pulteney has a highly distinctive character. Infused by a unique combination of brisk sea air and meticulous cask selection, the whisky captures the taste of the sea in every drop. From subtle coastal chords to more defined salty notes, the flavour of our whiskies says much about the role and influence of their home.

Unusually shaped pot stills, with particularly large boiling balls, make for a more fragrant whisky character and inspired the distinctive bottle shape, while our use of worm tub condensers, an increasingly rare practice, adds body and depth to the spirit.

No stranger to awards and accolades, Old Pulteney holds the coveted title of“World Whisky of the Year” for 2012 in Jim Murray’s Whisky Bible – one of the industry’s highest accolades – and in 2016 won the acclaimed “World’s BestSingle Malt Whisky” at the prestigious World Whiskies Awards. Most recently,Old Pulteney 12 Year Old and 25 Year Old won gold at the San Francisco Spirits Awards 2018.